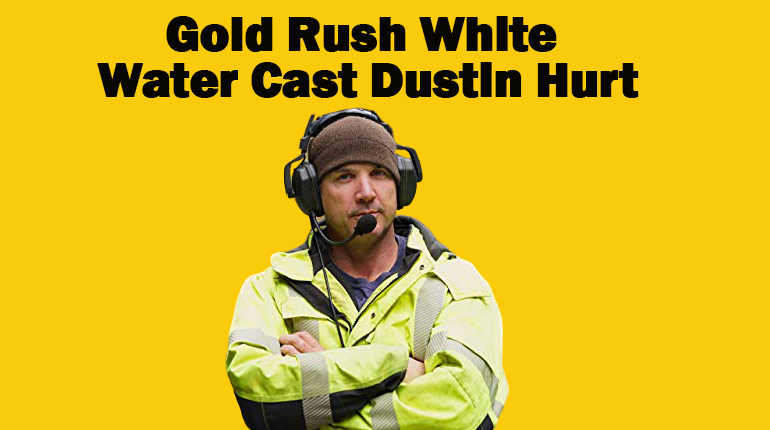 Dustin Hurt is a dredge diver, television personality, and claim owner. His time on screen has seen him work on shows like Gold Blooded and All That Glitters. For over two decades, Dustin has worked with heavy machinery. It dates back to when he was fresh out of high school and employed by a construction company. They operated along the Louisiana Bayou, fixing seawalls.

At one point in his career, Hurt worked with the California Forest Service as a wildland firefighter. We have lined up a few details about Dustin’s biography that you might find interesting.

Dustin Hurt is a cast of Gold Rush: White Water.

The cameras are trained on a group of Dakota Boys, who each come with different sets of skills. These range from expert divers, mountain climbers, and mechanics. With all of these skills on display, the group ventures out to excavation sites, which other miners would not even think of exploring. These include the numbingly freezing bottomless depths of pool in white rapids.

Besides Dustin Hurt, the show also stars the likes of Paul Richardson, Fred Hurt, Carlos Minor, and Wes Richardson. As of 2020, Dustin has appeared in 31 episodes, making him the longest recurring cast member. Gold Rush: White Water first debuted on January 19th, 2018. The episode called ‘Between Craziness & Insanity’ saw the crew take a once in a lifetime trip to McKinley Creek/.

Here, they dove into the icy waters in search of millions after Dustin found an efficient plunge pool. The crew’s first outing together did not go smoothly as their mining equipment with destroyed by the harsh Alaskan Winter.

The show puts most fans on the edge of their seat as Dustin embarks on dangerous dives. One such incident came while he was in the water, and the current dislodged a boulder, sending it hurtling towards him.

Why he left Goldrush?

Dustin and his father, Fred Hurt, officially left Gold Rush: Alaska back in 2014. The official story we got at the time was that they quit the show because of creative differences with their producer. Dustin’s father came out to shed some more light on the matter.

He said that they were not compensated as much as the rest of their co-stars. They were also not willing to go along with everything the producers wanted. According to the Hurts, the producers wanted them to act like actors without compensating them accordingly. Some fans questioned why they were greedy because they reportedly earned thousands of dollars per episode.

However, Dustin Hurt came out to confirm that they were not remunerated for their operating expenses. In his words, they were entertaining the fans with their resources, and not the network’s. By 2018 though, Dustin and his father had patched things up with the producers.

They subsequently appeared on two specials: The Dakota Boys, which aired on 2018, and Fortune Favors the Bold, which was released two years ago.

Sources say that Dustin Hurt was born in 1977 in New Orleans, Louisiana. It makes him 43-years old presently.

Who is Dustin Hurt’s wife? Kids?

Dustin Hurt is married to a woman named Arin Alhum Hanson. There are no details regarding their personal life. As such, we cannot confirm whether they have any children or not.

It should not surprise you that television and mining are the two primary sources of income for Dustin. During his initial run on Gold Rush-Alaska, it is reported that he and the rest of the cast earned about $22,000 for every episode they worked on.

This totaled to earnings of about $400,000 every year. Dustin and his father Fred also had several gold mining claims, which make them thousands of dollars. Such claims include the Porcupine Creek. Dustin Hurt’s net worth is reportedly $1 million. It pales in comparison to his father, whose personal wealth tallies up to $6 million. We have a feeling that some of this money will go to Dustin in the future.