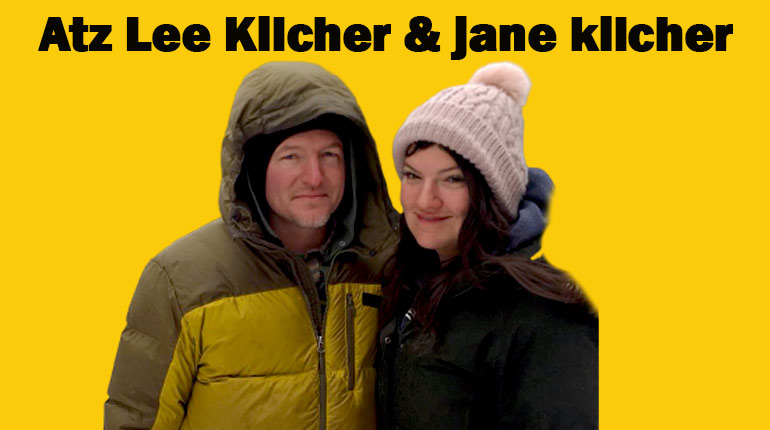 Atz Lee is a 42 years old American musician and actor known for his cast on Alaska: The Last Frontier. The Last Frontier is a family reality show on the Disney channel that revolves around the Kilcher’s family life as they adapt ways to survive without the modern technology in their homestead in Alaska.

Continue reading to know Atz Lee Kilcher’s Net Worth. Also, please wait until you meet her wife Jane and their Children Eitenee and Piper Kilcher.

Who is Atz Lee Kilcher?

Atz Lee Kilcher left his hometown to pursue his music career. He moved all over the US with his guitar chasing his dream. However, these efforts did not yield much fruit, so he returned to his roots in Alaska.

He is the son of Atz Kilcher, who, together with his mother Charlotte Kilcher, is the head of the large modern Kilcher family of the ‘Last Frontier Show.’ This show first premiered last 2011 has run for nine successive seasons, its previous air was in February 2020, and the possibility for the tenth season is imminent.

Lee has embraced the harsh life in Alaska and seems to be doing great. Being a risk-taker and his love for heights, he has suffered a great deal of his brevity when he once fell from a 40-foot fall that resulted in him breaking 25 bones and puncturing both his lungs. He spent most of his healing time building a cabin with the assistance of his elder son, who gave him a helping hand.

Hunting is his way of getting food, and he loves being in the wilderness. The outside world once tried to pursue him, but he found himself back in nature. To ensure that he gets the choice meet he desires, Lee, at one point, collided with the authority when he was charged with hunting a deer with a helicopter, which is illegal in Alaska.

Atz Lee and Jane got married in 2006 at the head of the Bay. Having met while they were kids, their first failed marriages brought these neighbors together.

Since their wedding, the couple has not looked back. They both work hard to keep their family happy. While Lee is in the woods hunting, Jane, on the other does fishing, something she used to do for commercial purposes; now, it is only for domestic use.

Atz Lee and his wife Jane Kilcher were married to their previous spouses.

Atz Lee’s ex-partner was Natia Krisintu. There are not many details about their relationship, but they must have parted ways around 2005 before meeting Jane.

Atz Lee has a son Etienne Kilcher who is 19 now, who remained with his father. On the other side, Jane was first married to Dicran Kassouni, from Seldovia, Alaska. There are no details of their marriage and divorce, but the two had a daughter named Piper, who is now 17.

Atz Lee Kilcher and Jane Kilcher do not have kids together.

Since their marriage, Lee and Jane have not had kids. However, from their past relationship, they both brought a child to their marriage, and they have been the best parents for the boy and girl, Etienne and Piper, respectively.

Despite being on the TV, they both decided not to show their children, but let them get of age and decide what they want in life. However, they had appeared on a few occasions when Lee was building the cabin, and his son gave him a helping hand.

However, the two proud parents have not been afraid to show their children’s faces on social media. Lee posted a photo of his son’s graduation, congratulating him for the achievement and commenting on the critics.

The same week of his son’s graduation, Piper also turned 17, and the ladies threw a party for her and shared the photos on Instagram.

Now that the kids are of age, we hope they will choose to be on the TV.

This amount is accumulated from his consecutive appearance for the last nine seasons. It, however, does not indicate how much he earns per season or episode.

Apart from acting, his music may have played a part in boosting his net worth despite not being as active as his sister Jewel, who has made great exploits in her music career.

The more prominent Kilcher family resides in a 600 acres piece of land they inherited. This land has property, some of which Lee will take after or already possess. The details of such property are also not known.

Christina Jane Kilcher was born on 14th September 1974 in Homer, Alaska. Her parents are Bob and Sarah, the foreman. She has two siblings, Bob and Jessica.

Details about her education are not available, but her past life in commercial fishing gave her the chance to be in the reality show Alaska, The Last Frontier, and met her husband, Atz Lee.

A look at her social media, Jane has an active Instagram page, where she proudly described herself as a Kilcher girl, with over 35,000 followers. Most of her posts are about the show and family.

Atz Lee Kilcher was born on 26th August 1997 in Homer, Alaska, United States. He is the son of Atz and Charlotte Kilcher and brother to Jewel, a famous musician.

There are no details of his education, but he said to have run away from home to pursue his music career only to come back home and end up on a TV show that revolves around his family.

A look at his social media, Lee has an active Instagram account with close to 80,000 followers. He describes himself as lucky to end up on the TV show, a home lover, and a family man.