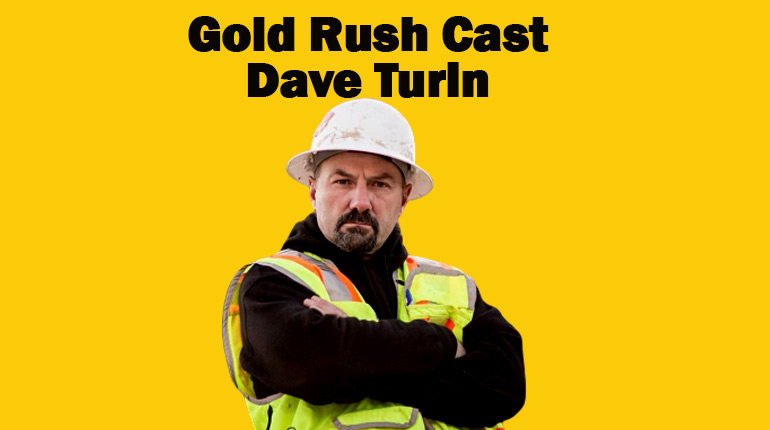 Dave Turin is an American Tv Personality. He made his first appearance on screen in Discovery Channel’s hit show, Gold Rush. He has also appeared in some of its spin-offs. Dave was part of Todd Hoffman’s crew in season one of Gold Rush: Alaska.

Though he only appeared in a few episodes when giving mining advice to Todd. Dave is known famously for starring in Gold Rush: Dave Turin’s Lost Mine spin-off.

Over the years in the mining industry, he earned Dozer Dave’s nickname. Let me take you through his life and know a few facts about him.

Dave grew up in Portland, Oregon, with his father and five siblings. He went to Sandy Union High School. Dave’s favorite sport was football, and he was very skilled at it. He majored in Civil Engineering for his college studies and graduated from Portland State University.

Dave is from a family of quarry miners, and that is how he grew up with interest in mining. He has been working in Mt. Hood Rock Hood Company, his family business, for thirty years. His career on the screen began when he was called by the Hoffman’s to work for Gold Rush as a mining consultant.

Dave Turin left his family business and joined Gold Rush in its 2nd season. He has been on the show up to its 7th season.

Dave Turin left the show because someone on Todd Hoffman’s crew disrespected him. Turin loved his time in Gold Rush, but he could not put up with the disrespect, so he quit the show.

His misunderstanding with Trey Poulson led to a fistfight, after which he decided enough was enough. He posted the reason for his departure from the show on social media.

Dave Turin is working on his new show.

On 9th April 2019, Dave was featured on Gold Rush: Dave Turin’s Lost Mine. The TV Programme is on OSN Network, and it’s currently in the second season.

Dave Turin’s lost mine is filmed near Helena, Montana. In the Television program, Dave visits disused mining sites with the hopes of finding gold that might have been left there during previous mining. Dave’s current dream is to make a fortune from gold mining now that he is his boss.

We cannot be sure if she still does or has already retired. Aside from that, he also helps Dave in his side businesses. Together, the loving couple has three children and two grandkids. Dave posts his family a lot on his social media accounts.

Dave Turin is estimated to have a net worth of $2 million. His net worth has grown chiefly thanks to his success in mining. Aside from that, he has also been working for his family business for over twenty years. According to specific sources, Dave Turin, Dozer Dave, makes $ 50,000 in every episode.

Dave Turin drives a heavy-duty Ford F-350 Pickup truck, which is ideal for his work. With his car, he can transport some equipment used in gold mining. So far, his new show has released 12 episodes, which means that he has already made $600k.

Wiki and Unknown Facts about him

Dave Turin was born on 21st April 1959 in Sandy, Oregon. He currently co-owns his family business with his three brothers, and he’s also his boss at Dave Turin’s Lost Mine. Dave was raised in a Catholic home, so we know that he’s religious. We also know for a fact that Dave Turin is a risk-taker.

He invests his life savings into his mining career, a big gamble. His Facebook and Instagram handle is @grdozerdave. Taking a peek at his posts, we learn that one of his sons’ names is Tony and his adorable grandchildren are Addy and Max. We also learned that he loves fishing with his son and grandchildren during his free time.