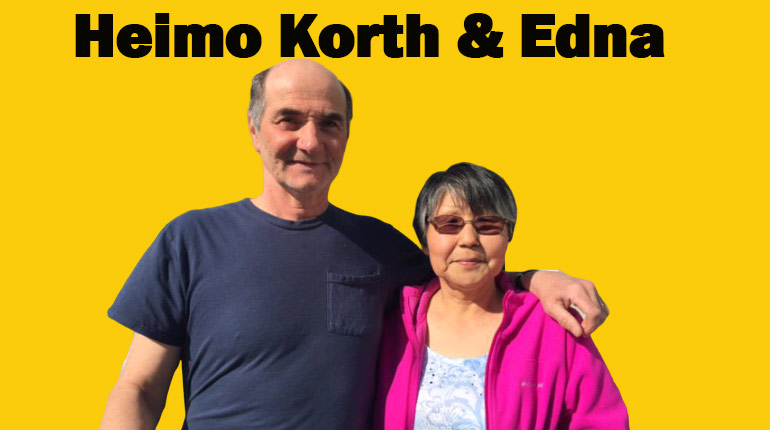 Heimo Korth is a reality star, trapper, fisherman, and hunter. Korth and his wife hold the distinction of being one of the few permanent residents of the Arctic National Wildlife Refuge. Edna and Heimo’s unique lifestyle has led to many print and broadcast media opportunities.

The latter has seen them appear on Surviving Alone in Alaska and Braving Alaska. They were even featured in a book back in the early 2000s. So how did Heimo and Edna meet? When did they tie the knot? Let’s find out.

His career in The Last Alaskan Show

The Last Alaskans boast some of the most exciting stories available on the Discovery Channel. This show stands out in an age populated by scripted and dramatized reality television.

It focuses on the lives of several Alaskan survival specialists as they try to hack it across the wilderness. The series’ first episode featured Heimo and his wife Edna on a hunt for a caribou herd.

We got to watch them slowly stalk their prey as they waited for an opening. Since this epic episode, the show has released 35 more episodes.

Throughout the show’s impressive run, we have seen Heimo hunt animals such as the giant bull moose, which has the potential to feed his family throughout the harsh winter.

His age and birthday.

Heimo has had various sources of income throughout his life. For a long time, he worked in wielding back in Wisconsin.

However, after making a move to Alaska, he switched to trapping, fishing, and even hunting. The wilderness provided him with the opportunity to track down and hunt animals like foxes and lynxes, whose pelts he then sold.

Heimo Korth’s net worth stands at $800,000. His primary source of income these days comes from his work with the Discovery Channel. Sources say that he earns about $3,000 for every episode of the Last Alaskans that producers ask him to work on.

A book about his life

Heimo and his wife have been featured in two books to date. The first came 16 years ago when James Campbell published a book titled, ‘The Final Frontiersman: Heimo Korth and His Family, Alone in Alaska’s Arctic Wilderness.’

The book was published on May 25th, 2004, by Atria Books. Its story follows Heimo as he embarks on the journey to become an expert hunter and trapper.

The Korths were also featured on a book called Warrior’s creed. It chronicled the exploits of Pararescue Jumpers, who set out to rescue Edna after a wild animal had attacked her.

How Heimo Met his Wife, Edna

Heimo and his wife-to-be met back in the winter of 1975 in Savoonga. At the time, he was a very good family friend. He mainly had a close relationship with Edna’s father, Emerson. Heimo spent considerable time with the family. His wife’s uncle even taught him how to trap and prepare fur. It would also be prudent to note that Edna used to go by her Yupik name, Miti Dowin.

So he left and did not return for three more years. When he got back to Savoonga, he was excited, and a little revealed to find Edna. He realized how lonely he had been over the years.

Her uncle noticed that Heimo had a crush on Edna. The two met at a bar, entirely by chance. It was made especially clear after he joked about Edna being his wife. Another three years followed before Heimo finally confessed his feelings.

The two went fishing for Dolly Varden for their first date before later following it up with a motorcycle ride. They marked the end of the day by getting pizza.

Finally, They got married.

Heimo and Edna made things official in the early 80s. It came after a short courtship. However, the two had known each other for quite a few years before then. Their romance was a whirlwind that left Edna completely flustered.

Edna’s past relationship and Children from the past marriage.

Before she started dating Heimo, Edna was involved with two other men. The first was a Swedish biologist to who she was engaged.

They were engaged with two children at the time he got into a tragic accident. HeIn a plane crash, he lost his life leaving behind two kids: Melinda and Merlin. The former was born in December 1977 and is 42 at the moment.

She was a mess after the loss of her fiancé. According to her uncle, the next man she dated did not treat her well at all. He could not even stay faithful. This is one reason why her uncle was reluctant to let her date Heimo until he was sure they were a good fit.

Edna was born on January 25th, 1954, and is 67 presently. Since she is a part of the Yupik clan, she was given the name ‘Miti Dowin.’ Being a part of this community has enabled her to fish as well as hunt.

Her uncle, Jackson Mokiyuk, was an expert in trapping foxes. He is the one who helped her learn how to prepare furs, as well as make accurate cuts. Edna knew what to do so that the hair would not be damaged. She also learned how to care for the fur once the animal had been skinned.

Presently, Edna makes handcrafted items that one of her daughters helps to sell online, mainly through Facebook. This is one of the ways in which Edna and her family made their living. They’d later sell their fur in Fairbanks.

Edna and her husband Heimo raised four children in total. The first two, as we mentioned, were from her first marriage. Their oldest daughter is Melinda. Though there is not much information available on her, we did learn that she is married to a former vet.

Later on, Heimo and his wife had a daughter named Rhonda. Their youngest daughter is named Krin. Edna and Heimo also had another child who lost her life after a horrible accident.

His youngest Daughter Krin Nelson is a cast of The Last Alaskan.

Krin and her husband Scott feature on the Last Alaskans’ Discovery Channel show. The two regularly visit Krin’s parents, Heimo and Edna, at the Arctic National Refuge in the wildlands. Heimo even lets them borrow a cabin he does not use anymore. Additionally, the two inherit their parent’s claim to the reserve.

Edna and Heimo had a daughter named Coleen Ann Korth. She was born on May 29th, 1982. Two years after her birth, tragedy struck.

The family was on a boat, sailing across the 52-mile-long Coleen when they were caught against the current. Their boat capsized, and Coleen was swept against the wind.

Her parents knew that she was dead, even though Coleen Ann’s body was never found.