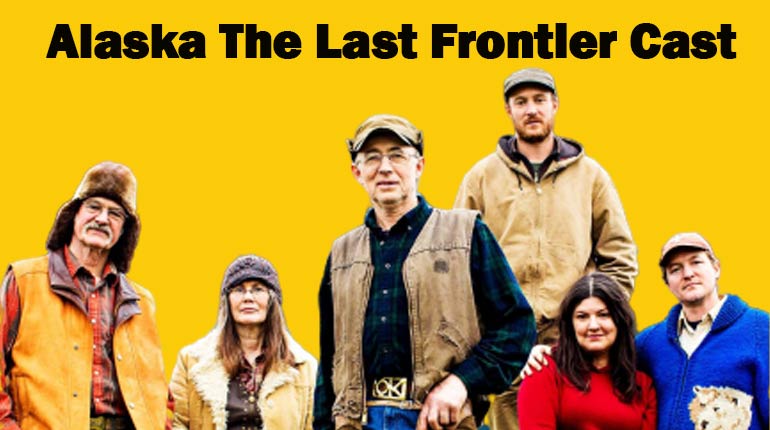 Alaska: The Last Frontier is an American reality series on Discovery Channel. It follows the real-life activities of the Kilcher family as they strive to survive the harsh winter conditions of Alaska. They live en masse in their expansive 613 acres of family land. The family has to utilize their summers and falls through hunting, fishing, and farming to get their winter food quota.

Moreover, they lack many modern amenities that the ordinary man is used to. You may want to bring heavier clothes as we travel to Alaska to meet the Kilcher family.

Alaska: The Last Frontier cast is the Kilcher Family.

The Kilcher Clan in the United States has Yule Kilcher and Ruth Weber to thank their founding parents. The couple bore eight kids. Among them are his two sons, Otto and Atz Kilcher. Otto’s kids are Levi Kilcher, August, and Eivin Kilcher. On the other hand, Atz Kilcher’s kids are Atz Lee Kilcher, Jewel Kilcher, Nikos Kilcher, and Shane Kilcher.

Atz Kilcher is the father to Atz Lee Kilcher, Nikos Kilcher, Jewel Kilcher, and Shane Kilcher. Atz was 74 years of age in 2020. He was born on September 2nd, 1947. His salary is estimated to be about $20,000 per episode. Thanks to the show’s high ratings, Atz can take home six figures per season.

To illustrate, Alaska: The Last Frontier is the second-highest-rated show of Discovery behind Gold Rush. Atz Kilcher’s lifestyle may be essential, but his bank account is certainly anything but basic. He boasts an estimated net worth of $6 Million. Aside from his reality television career, Atz is also a musician. He has even put out an album with his wife.

Below is Alaska: The Last Frontier Cast Kilcher Family Tree.

Atz Lee is a third-generation Alaskan Kilcher after his grandparents moved to the United States from Switzerland during the Second World War. He was born on August 26th, 1977. Atz Lee was 44 years old at the time this write-up was created. Aside from his survivalist activities like hunting, Atz is also a guitarist. Kilcher is reportedly paid $20,000 per episode of Alaska: The Last Frontier.

Thanks to the show, Atz can rest easy knowing he is in the millionaire’s league. That’s because he has a net worth of $3 Million. His income mainly comes from his work on the show and his stage performances as a guitarist.

She is a famous musician who has also been featured on Alaska: The Last Frontier. The musician was born on May 23rd, 1974. She will be 48 years old in 2022. Jewel’s star sign is Gemini. Her debut on the hit reality show was in 2016. In that season, she appeared in three episodes with her little son. Jewel’s participation in the show is always a welcomed sight for the fans.

Since Jewel Kilcher is a fan magnet, her salary per episode is excellent. She could quickly be making $20,000 per episode of the show. Jewel Kilcher’s net worth is a whopping $30 million. Considering that she is a four-time Emmy nominee and has sold over 30 million albums, the figure is not surprising.

Otoo Kilcher is a second Kilcher generation in Alaska. Otto is the sixth born of Yule Kilcher and Ruth Kilcher. He was born on April 19th, 1952. He is the dad to Levi, August, and Eivin. Fans from the show know that Otto is the man to go to if you need beef in the family. We don’t mean the urban slang for conflict; instead, we mean beef. You know, the stuff that grows on a cow’s skeleton.

Otto is paid handsomely for his work on the show. A cool $30,000 gets its way in his account every time he is featured in an episode. Thanks to his ranch business and the show, Otto is worth a reasonable $4 million. Thankfully, he has a herd of well-nourished cows to get the meat.

This Alaska: The Last Frontier cast is the wife of Otto Kilcher. The couple met when Charlotte went to Alaska to learn about the area’s wildlife biology. Upon meeting Otto, the two became smitten, and Charlotte turned from an Alaskan tourist to a homegirl. When Charlotte lived in California, she was a vegetarian. However, after settling in Alaska with her husband, she gave up her vegetarian lifestyle.

Meat is an essential source of nourishment in Alaska, and it could very well mean the difference between life and death in the state. They consider that plants can’t thrive all year round in the frigid conditions in America’s last frontier. Charlotte Kilcher engages in beekeeping, milking cows, and poultry keeping. This is always captivating for fans to watch. For her contribution to the show, Charlotte gets $20,000 per episode.

She is the daughter in law to Otto and Charlotte Kilcher. Eve is the wife of Eivin Kilcher. The couple has two children named Sparrow Rose Kilcher and Findley Farenorth Kilcher. She is known for her work as a farmer. Eve is skilled in growing Fruits and vegetables, which her family depends on in the winter. Aside from being a farmer, Eve is also a cookbook author.

Together with her husband and Jewel Kilcher, she has co-authored a book entitled, Stories and Recipes from Our Hearth to Yours. Eve’s salary is about 30,000 per episode of the show. She is estimated to be worth about $2 million.

Poor is the narrator of the reality series Alaska: The Last Frontier. Bray can effectively capture the attention of the audience from his narration. Moreover, he helps give context and explain the casts’ activities, thus engaging the show’s viewers. He has narrated over 93 episodes since the show debuted in 2011.

Bray Poor earns about $50,000 per episode of the hit reality show. Despite his second name being ‘Poor,’ Bray is far from a peasant. Bray has amassed a net worth of about $4 million through his work on the series. As the show grew in ratings, Bray’s captivating voice and narrating skills became beloved and familiar to the show’s audience.

She is the wife of Atz Lee Kilcher. Jane’s full name is Christina Jane Kilcher. She was born on September 14th, 1974. When writing this article in 2020, Jane was 45 years old. Jane and her husband have been blessed with two kids, a son, Ettienne Kilcher, and one daughter.

On the show, fans marvel at Jane’s fishing skills that keep the family stocked with fish supplies through the winter seasons. Her salary per episode is $15,000. Jane’s estimated net worth is $500,000. Interestingly, Jane is also a singer. Music was actually what Jane and her hubby first bonded over.

Dupree is the wife of Atz Kilcher. She was born on February 5th, 1954. She was 66 years old in 2020. Bonnie met her hubby when she explored Alaska at 22 years of age. She then settled down in the state with Atz. Previously, she lived in New York. The couple has been blessed with four kids. However, Bonnie has two more kids from her former marriage.

Her kids’ are Atz Lee Kilcher, Jewel Kilcher, Nikos Kilcher, and Shane Kilcher. Bonnie receives a $20,000 per episode of the show Alaska: The Last Frontier. Over the years, her net worth has grown to an estimated figure of $2 million. Aside from her profession as a reality star, she is also a musician. She has a music album with her husband entitled, ‘Good Old Fashion Way.’

He is the son of Otto and Charlotte Kilcher. August was born in 1997, and he will be 23 years of age in 2020. August is an upcoming electrical engineer. He studies at Oregon State University. Aside from his career in engineering, August is also involved in singing and acting.

Moreover, he is involved in efforts to prevent gender-based violence. Undoubtedly, August is growing up to be a responsible young man. I’m sure that his parents are very proud of him. August is estimated to get a salary of $20,000 per episode. His net worth is about $400,000.

He is the son of Atz Kilcher and his lovely wife, Lenedra Carroll. His date of birth is May 6th, 1971. That means that he will be 49 years old in 2020. Shane has been married to Kelli Kiilcher for the past three decades. The couple has been blessed with four kids Keenan, Jareth, Jenna, and Ried.

Fans of the show love his sense of humor. Consequently, he has contributed to increasing the show’s ratings. For his great work on the show, Shane earns $30,000 per episode. His estimated net worth is about $4 million.

Yule immigrated to the United States from Switzerland in the 1930s. He was the original patriarch of the Kilcher clan living in Alaska. Sadly, he passed away in 1998 at 85 years of age. Thankfully, he left behind a family that has become one of the most famous Alaskan families. Yule and his lovely wife, Ruth Weber, were blessed with eight kids who have borne them two more generations.

To be specific, the couple had six daughters and two sons. In his lifetime, Yule was able to work his way up to a net worth of $100,000. His wealth was earned from his work as a politician, farmer, and journalist. As a politician, Yule was a senator of Alaska from 1963 to 1967.

Now you have met all the Kilcher Family. Who is your favorite Alaska: The Last Frontier Cast? Comment us.