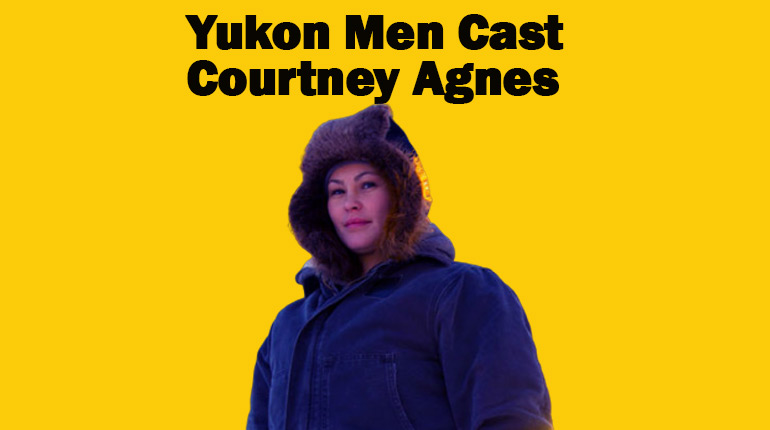 Courtney Agnes is an American reality television star famous for her work in the captivating reality series Yukon Men.

Despite the show being named Yukon Men, Cortney proves that it is as much about the women as the men. Yukon Men chronicles Cortney and the other cast members’ struggle to survive in America’s last frontier, Alaska. Courtney is a skilled hunter, fisherwoman, and gatherer.

She is also the daughter of Pat Moore, a principal cast member of the series. Pack your winter clothes, and let’s visit Courtney’s world to learn about her life in our insightful write-up below.

Courtney Agnes is Married to her husband, Archie.

Courtney is happily married to the love of her life, Archie. The loving couple lives in Tanana with their two kids. In an interview with Jim Jax, Courtney revealed that her husband Archie is a hardworking and devoted family man. She also said that he is a timid person.

That might explain in part why he is rarely seen on the show. However, we also learn from Courtney’s interview that Archie is also away most of the time for work.

Archie works in an oil rig in Alaska 16 days a month. However, it’s not all work with no play for Archie. He is also an avid outdoorsman who loves snowmobile racing and boat racing.

Courtney Agnes undoubtedly loves her husband, Archie, and it is apparent from the way she fondly speaks about him to Jim Jax.

Moreover, Courtney has posted an adorable photo on her Instagram of her kissing Archie’s forehead. On the post-dated April 6th, 2020, she captioned the image with the beautiful words, ‘me and him. Him and me.’

Aside from that, her Facebook profile picture is of her cozying next to her husband. She has a lovely wedding photo of her and Archie embracing each other and their noses touching on her profile information. Without a doubt, Cupid indeed did an excellent job on this one.

Courtney Agnes and Archie’s Have one Biological Daughter and One Adopted Daughter.

Courtney and her hubby Archie are the proud parents of two lovely daughters. Their little angels are named Cuppy and Carrie. Cuppy is the older of the two. Courtney Adopted Cuppy. Carrie is the only Biological daughter of Courtney Agnes. The Yukon Men female cast Courtney’s Instagram is awash with photos of the two adorable girls.

Courtney’s photos are of her two girls washing the dishes, decorating their Easter goodies, and doing their homework.

On April 7th, 2020, Courtney posted a hilarious post of her daughter Carrie doing her homework. She captioned the photo saying that homework was bull and that teachers should go and take back their kids.

Agnes adorably ended the post writing ‘just kidding’ and #Quarantine2020. According to Courtney, Archie is the best dad to their kids. He is also a pushover dad. However, we can’t blame him. His daughters are too cute. We also learn that he is extremely patient and kind with his daughters.

Courtney Agnes is a fierce survivalist who showcases versatility and fearlessness when fending for her family. Her braveness and skills made her a favorite in the Yukon Men series.

Aside from her work on the show, Courtney makes beadwork, which she advertises on her social media pages. Most of her beadwork is priced from $30 to $100.

Her Instagram and Facebook are flooded with excellent photos of her handmade jewelry. On top of that, she also makes slippers, gloves, boots, and bracelets.

The Yukon Men Female cast Courtney Agnes has also used her artwork for charity. Recently, she sold her handmade beadwork to raise funds for her aunt, Linda Moore. Her aunt had been scammed off all her money. On top of that, she had several health issues.

Courtney revealed these details in a Facebook post dated February 12th, 2020. Luckily, all the beadwork she had put up for charity sold out.

Courtney’s mom, Lorraine, fell victim to a debilitating illness that has made her entirely dependent on her family. Before, Lorraine was an independent Alaskan woman who was the rock of her family. However, she was diagnosed with an aneurysm as well as arthritis.

Her condition has sadly left her fully disabled. Thankfully, her family has stood by her side all along. Cortney’s mother is known to be kind and loving, and fans of the series love her to pieces. We wish Lorraine a full recovery from the bottom of our hearts.