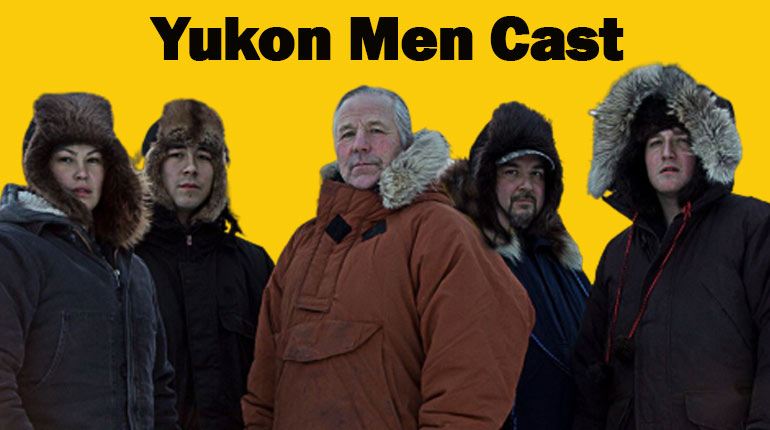 Yukon Men is an American reality television series that aired on the Discovery Channel. The show chronicles the lives of several families who live in a remote part of Alaska called Tanana.

The families on the show are part of a small population of just 200 people living in the area. Due to the harsh climate, the families are forced to lead a hunter-gatherer lifestyle.

Most of their livelihood is dependent on the Yukon River, hence the name of the show. Grab your winter coats, and let’s explore the frigid land of Alaska to meet the cast of Yukon Men.

Yukon Men made its television debut on August 24th, 2012. The show became an instant hit, and over the years, it rose to a rating of 7 out of 10 stars.

The show’s popularity was mainly due in part to the ability of fans to vicariously experience what it meant to live in a frozen wasteland. It made shows like Survivor look humdrum and child’s play.

The show became a new cash cow for the Discovery Channel, and it was a no-brainer to renew it after season 1. For a good four years, the show kept fans glued to their screens.

In total, the show had 60 episodes spread out over seven seasons. Each episode was aired for about 45 minutes, each time leaving fans at the edge of their seats. The last episode of season 7 was aired on April 22nd, 2016.

According to various sources, Discovery could not keep paying fat checks to the cast after the show’s ratings dropped. Consequently, it was no longer feasible to continue with the show’s production. Fans especially missed their favorite cast member, Stan Zuray.

However, it’s not all doom and gloom. Four years after season 7, the producers are yet to put out a word about renewing the series. Most likely, season 8 will never see the light of day.

Fans can get some respite as Stan Zurray has a chance to have his documentary. The documentary The Stan Project will delve deeper into his life and venture further out of his surroundings. The documentary was set to air in April of 2020.

He is one of the most favorite cast members of Yukon Men fans. Stan doesn’t disappoint when tackling the most complex challenges in ingenious ways.

Contrary to expectations, Stan is not a native Alaskan. Stan was born and bred in Boston. However, he started to loath the modern lifestyle that had turned his dad into a work machine.

Due to his dad juggling multiple jobs, Stan never really had enough time to bond with his dad. For him, it was simply not a way to live. He packed his belongings and ventured to Alaska.

His goal was to lead a less round-the-clock life. This would not deprive his children of having enough time with him.

Stan has lived in Tanana for over 40 years now, and he has nearly shaken hands with the grim reaper a good number of times.

To put it bluntly, Stan has nearly drowned and almost gotten mauled by a bear. However, that hasn’t set a damper on his spirits. He continues living his subsistence life in Alaska to date.

He is the son of Stan Zurray. Just like his father, Stan is a tough survivor in the frigid conditions in Alaska. Luckily for him, he was born and raised in this icy hell and thus has adapted and learned a great deal from the native locals.

Stan was taught how to hunt and gather by his dad, Stan. Joey carries an independent spirit armed with well-honed skills that are his only lifeline to survive in the frozen world of Alaska.

Those men who are still at the fence about a woman’s strength should watch Courtney Agnes in action. Yukon Men Cast Courtney has mastered the art of survival that many women will never dream of. Courtney is the daughter of Pat Moore, and boy, must he be one proud dad.

No challenge is too hard for this iron lady. Courtney is always up to the challenge, whether it is training sled dogs to be used for transport or preparing the fish wheel.

If the fish aren’t dumb enough to get caught, then Courtney will not blink about hunting for some meat. All the while, Courtney is also a mom of two.

Jordan is a determined man who had taken a 12-year hiatus from the frigid land of Alaska. Living in the city was not enough for this survivalist, and he found himself on the back-trails to Tanana. Jordan brought with him a whole bag of energy and then some.

He would be Tanana’s new dog keeper. His patience and composure are undoubtedly an asset in frozen Alaska.

Luckily, Nations has the best people to piggyback on if he finds himself in the deep end; his uncle, PAT Moore, and his cousin, Cortney Agnes.

Wright is everything but a coward. He boasts of a skillset that could rival Tarzan’s, if he was even a natural person, of course. One of the most formidable hunters in Tanana, Locals, often implores his help to catch even the most impossible predators.

Luckily, Yukon Men cast Charlie as the right man for the job. Thanks to having his roots in Alaska, Charlie has honed his hunting and gathering skills.

Charlie has conquered America’s last frontier thanks to his wit and skills. He grew up near the Yukon River and later moved to Tanana more than two decades ago. Consequently, Charlie is a library of Alaskan animals and the surrounding landscape.

Wright is a Yukon Man just as his dad, Charlie Wright, is. Though Bob would rather live in Fairbanks, he braves the Tanana weather and conditions. Over the years, Bob has learned from Alaska’s best about surviving.

Unfortunately, Yukon Men cast Bob had a close brush with death when he got involved in an almost fatal snowmobile accident. He is still recovering from the physical and mental scars he suffered. However, his survivalist spirit will undoubtedly get him through.

Roberts is the cast who has the most exceptional knack for business in the series. James is a hardworking husband and a dad to four amazing kids. With his thriving firewood provision business and his successful dog kennel, James has been able to bring home the bacon, or in his case, the salmon.

Pat Moore is a family man who will not stop at anything to ensure his family survives and thrives. He is a vital resource to Tanana as he has been raising the best sled dogs for his community.

He also helps in various other community projects. After his wife got a debilitating illness, the stakes are now higher for him.

Thankfully, he has two grown kids to lean on if things get shaky. Pat is also a loving granddad to his children’s kids.