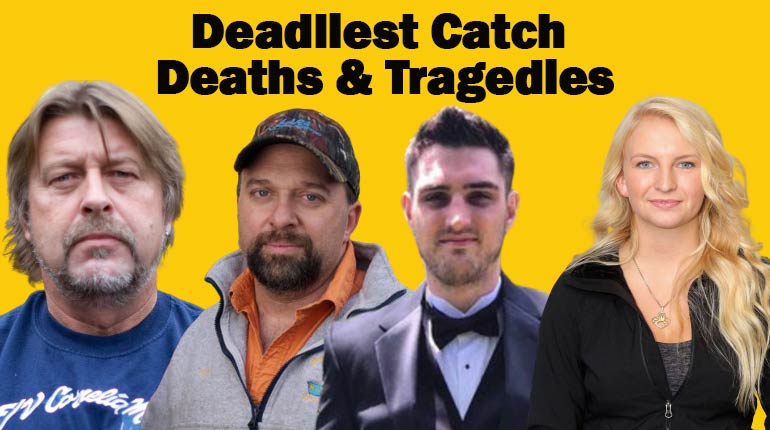 The Deadliest Catch is a Discovery Channel series based on the exploits of Alaskan Crab Fishermen. Each episode chronicles their adventure along the Bearing Sea. It is easily one of the most dangerous jobs in the world. Those brave enough to venture out into the sea face all kinds of dangers and uncertainty. This is the reason why Coast Guards are stationed all across the sea.

Despite this, several ships have still crashed. These include the likes of the F/V Ocean Challenger and the F/V Katmai. Take a look at some of the tragedies on the show.

In January 2010, Phil Harris and the rest of the Cornelia Marie crew were offloading their latest catch when he experienced some discomfort. It prompted him to search for some painkillers; instead, Captain Harris collapsed in his stateroom. He was found by a crew member named Ward, who promptly alerted his sons.

At the time, Phil was still conscious yet unable to move the left side of his body. The doctors had to put him under and open his cranial vault to release the building pressure. They called for paramedics, and he was eventually rushed to Anchorage.

Captain Harris spent over ten days in the Intensive Care Unit before he died on the 9th of February 2010. An autopsy revealed that Phil Harris had succumbed to complications caused by his stroke.

Keith Anderson’s story is a tragic one. In 2010, he disappeared somewhere in Washington State after leaving his home. The family was concerned when they could not get in touch with him. In the 43-years he had been with his wife, Keith had never spent a night away from his wife. The authorities’ initial search was not fruitful. All they found was his pickup somewhere along a logging road.

Curiously enough, they also located his phone close to his family home. His son Jake feared for the worst after police spotted traces of blood on Keith’s car keys.

He immediately suspected foul play. The police, however, also took into account the fact that Anderson suffered from a drug problem. It would take two years before the police finally solved this mystery.

A runner contacted the police after finding human remains close to where Keith’s car was last seen. DNA testing eventually confirmed that it was Keith.

Captain Lara took over the F/V Cornelia Marie after the death of Phil Harris. In 2011, Tony Lara passed away aged 50. According to police reports, Lara died in Sturgis, South Dakota.

Fans took to social media to send their condolences to Captain Lara’s family. He was in town for a motorcycle rally. When news broke, no cause of death was given by the authorities. However, after an autopsy was conducted, we learned that Tony had suffered a heart attack.

In February 2011, news broke that Justin had succumbed to sleep apnea-related complications. This condition can cause the heart to enlarge and give you high cholesterol. In Justin’s case, it resulted in his death at 33. He used to work on the fishing vessel, the Time Bandit, right up until his end.

In 2015, the Los Angeles County Sheriff’s department reported that Joe McMahon had been shot dead in front of his Pasadena home. Police responded to calls about a possible gun-related incident at a 3600 block along Yorkshire Road. Upon investigating, the authorities found a 25-year old victim with gun-shot wounds.

Family members identified the body as Joe McMahon. Police later on located the suspect in West Los Angeles. He had killed himself after shooting McMahon. Joe was a producer for the Deadliest Catch at his death.

May 2018 saw the Clatsop County Sheriff’s department reveal that Captain Painter had been found dead in his Oregon home. Blake was 38-years old at the time of his passing.

Police authorities conducted a wellness check on him after his friends reported not seeing him for a few days. Once the police entered Blake’s home, it quickly became apparent that he had been dead for a few days.

Initial reports suggested no foul play or any signs of forced entry. To that end, a toxicology report was conducted to find the cause of death. The authorities also found prescription drugs in his apartment at the time.

During the 15th season of Deadliest Catch, fans watched as Mandy and the rest of the crew aboard the Northwestern almost suffered a life-threatening accident. The line snagged in the picking hook when deckhand Clark tossed the trailer bag off the rail.

Mandy, who was captaining the vessel, was not aware of what was happening. As such, she did not take the boat out of gear.

This caused the tension to build, right up until it snapped, sending the three-foot steel hook towards the crew. Her father, captain Sig, was also on board during the freak accident.

He helped Mandy understand what she had done wrong to avoid recurring accidents in the future. This happened during the fourth episode of the fifteenth season.

While filming the season finale for the 12th season, Sig Hansen suffered a heart attack. In an interview, Sig revealed that he would have lost his life if he had fallen asleep. Instead, he drove his boat to the nearest port in the vicinity and alerted paramedics. Hansen was then airlifted to Anchorage to receive medical attention.

When he was brought in, his doctors estimated that Sig had 50-50 odds of surviving. They further told him that the heart attack was stress-related. This was not surprising when you considered the nature of his work. Luckily, Hansen was able to recuperate.

Now he wears a fit-bit and exercises regularly to stay in shape. There’s the threat of another heart attack, but Sig does not want to stress his family.

Fans were left shocked during the 6th episode of the 16th season of Deadliest Catch. Norman suffered a seizure while aboard the Northwestern. Viewers watched in agonizing anticipation as the rest of the crew tried to stabilize him. They tried rolling him on his side while the rest of the team shouted at the film crew to stop filming.

The fall had caused Norm Hansen to hit his head and injure it. The crew’s quick intervention saved Norman’s life. He was resurrected even before EMTs arrived.

Sig and the rest of the family waited for a stressful eight hours before the doctors confirmed no permanent brain damage. Norman is back home, recovering presently.

The season 15 finale proved to be a nerve-wracking episode for fans. Cody Rhodes suffered a horrific accident. A 1,000-pound steel crab pod landed hard on his leg. The force shattered his leg completely, cutting deep into the flesh and twisting his bones. It indeed was a gruesome sight.

Some crew members revealed that Rhodes had shattered his fibula and tibia entirely. He was airlifted to the nearest hospital. They had to wait for about two hours before the help arrived aboard the FV/ Karie Marie.

During the 15th season of the show, Nick lost his footing on an icy deck and suffered a severe fall. He injured his ankle, throwing the whole crew into disarray. The team came to Nick’s aid once he started yelling.

While he was being attended to, he called Wild Bill, the captain of the vessel he worked on, relaying the bad news. An x-ray revealed that while his leg was not broken, he had suffered a severe sprain. Remarkably enough, Nick grabbed a set of crutches and got back to work as soon as he could.

Jensen’s accident was minor compared to everything else that has happened on the show. He banged his knee on a pipe while on deck. Taylor tried to shake off the injury and carry on with his work. However, he had to slow down after his knee began to swell. The event took place during the 14th season of the show, in its fourth episode.

Back in 2016 unique, Dungeon Cove, fans could only watch as one of Captain Gary’s men suffered a nasty accident. As one of the crew members was going about his work, the 600-pound block gave way and pinned deckhand Justin Frost to the rail. The crew was attempting to cash in on an extra $18,000 from a live crab buyer when the incident occurred.

The crew immediately shouted for the captain to get the ship out of gear. Once the vessel stopped, the rest of the team scrambled to secure the block and uncover what caused the accident. Fortunately, Frost’s arm did not break, and he only suffered minor bruising. He was very fortunate as the accident could have been fatal.

The FV/ Wizard was sailing across the bearing sea, amidst wave after wave of crashing waves. The crew was unloading crabs onto the deck when a big wave struck. They were caught in a 250-square mile storm at the time.

Unfortunately, one of the deckhands, Freddy, slammed his knee into the corner of the metal hopper, which left him in pain.

Freddy remarkably shook off the bump and got back to work, ignoring his pain. During their scheduled break, the captain insisted on checking on Freddy. Funnily enough, the 18-year veteran emphasized that it was just a tickle. The incident took place during the 16th season of the show.

Keith Colburn suffered an unfortunate head injury during the 10th season of the Deadliest Catch after he plunged into the freezing water to repair his hull when the boat heaved slightly. The 499-ton vessel crashed against the captain’s skull as it settled back into the water.

The rest of the crew pulled him back aboard and tended to their injured captain. His head was banged up and bloodied. It took nearly an hour and twenty minutes for him to find his bearings again. He could not entirely recall everything that had happened.

Keith Colburn had to take a sabbatical from the fourteenth season of the Deadliest Catch after he was diagnosed with a spinal cord infection. He told his fans that he was plagued with a severe bacterial infection known as osteomyelitis. It typically causes inflammation of the bone, swelling, fever, and in extreme cases, septic arthritis.

Captain Colburn had to take anti-biotics every day while recuperating at home to treat the disease. This left him unable to captain his vessel. His brother, Monte, replaced him aboard the Wizard while recovering.

We have to go aboard the F/V Wizard once more to examine another accident that occurred. As captain Colburn attempted to navigate his vessel through the first major arctic storm of the season, his boat was rocked by dangerous waves. The force of one such tide caused a line to come undone, putting the crew in danger.

A deckhand named Roger bore the brunt of the aftermath. His hand got caught between a crab pot and the side of the boat. Captain Keith shouted at the rest of the crew to keep away from the rails. Funnily enough, Roger just grinned into the camera and said he could work through the pain. Unfortunately for him, the ordeal was far from over.

Another pot slid off balance and right onto him. Roger was lucky as the second accident also proved minor. All in all, he only incurred a bruised left testicle and a sore hand.