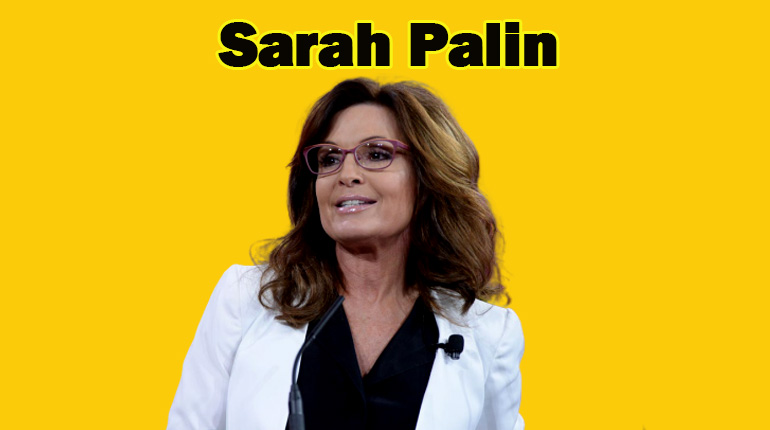 Sarah Palin is an American politician, media personality, and author. Palin is best known for being the first female governor of Alaska from 2006 to 2009. She is also known for being the first woman Republican to be selected for the vice president candidature by John McCain. Due to her political career, she got a job with FOX News as a political commentator from 2010 to 2015.

Sarah is also known for launching her news network exclusively online named Sarah Palin Channel. Let’s dive into Sarah’s life to look at her career and personal life in detail.

Sarah Palin is a former Governor of Alaska.

Sarah was the ninth governor of Alaska from 2006 to 2009. The state elected her as their first woman governor. Moreover, she was also the youngest governor Alaska had ever had. However, Sarah didn’t just wake up and decide to run for governor one day. Her political career had begun in the early 90s when she was elected to the city council of Wasilla.

Later on, in 1996, she ran for the office of Mayor of Wasilla, and she won. Her goal in seeking the position was to ensure that Wasilla’s collected revenue would be spent wisely. It seems that the residents of Wasilla were pleased with her tenure, and consequently, she got reelected in 1999.

She is a TV Star.

Sarah Palin’s first job was in television as a sportscaster for KTUU-TV and KTVA-TV. From 2010 to 2011, Palin was the Sarah Palin’s Alaska show host on TLC. Later on, in 2014, she started hosting American America with Sarah Palin. She did the show until 2015.

Without a doubt, Sarah is an ambitious woman. Not only from the standpoint of her political career but also as a media personality. Sarah aimed for the stars on July 27th, 2014, when she decided to launch her news network. As aforementioned, the network’s name was Sarah Palin Channel.

Unfortunately, her channel didn’t make it past the one-year mark. In 2015, it was close to business for the online network, but we do laud Palin for trying her best. Every failure is a lesson of how not to do things, and should she relaunch an online news network, at least she knows what not to do.

Net worth and house.

Sarah Palin is reportedly worth about $8 million. She has earned most of her wealth from her career as a television host on various news and political shows. It is reported that Sarah was paid $250,000 per episode of her reality show, Sarah Palin, Alaska.

She also made a lot of money from the sale of her book, “Going Rogue,” which reportedly earned her a whopping $7 million after selling over 2 million copies. Sarah lives in a lavish two-story mansion located at the western end of Wasilla. The house overlooks Lake Lucille, making it a waterfront property.

The Plains park their two planes on the lakes, duo-colored in white and red. Their house also can be accessed from the Glenn Highway after going through its long driveway. The Palins have not one but two mansions on the property. Their first house was valued at $552,100 and was built in 2002.

Sarah Palin divorce: Here is why her husband of 31 years filed for divorce.

Palin was previously married to ex-husband Todd Palin. The two were high school sweethearts. They tied the knot on August 29th, 1988. Their marriage was a long one spanning 31 years. Sadly, on September 6th, 2019, Palin’s husband, Todd, filed for a divorce. Surprisingly, this was also Todd’s birthday.

However, the couple denied the shocking rumors. Well, I guess all good things must come to an end, and sadly, in this case, it was their marriage. During their marriages, the couple was blessed with five children, two boys, and three girls.

Todd Palin retired from BP in 2009, where he worked as an oil-field production operator. Aside from his career in the oil industry, Todd is also an entrepreneur. He owns a successful fishing business. Moreover, Todd is also a pilot.

During Sarah’s marriage with Todd, the couple was blessed with five lovely children. As aforementioned, they bore three daughters and two sons. The girls’ names are Piper, Willow, and Bristol. The sons are Trig Paxson Van and Track CJ. Sadly, Trig, who is Palin’s youngest son, was diagnosed with Down syndrome while still in the womb.

Track Cj is Palin’s firstborn. He was born in 1989. Bristol, the first daughter, was born in 1990. Willow joined the family in 1994 and Piper in 2001. Trig Paxson Van was born in 2008. Palin is also a grandma. Her daughter, Bristol, has three kids. Track, on the other hand, has two lovely children.

Willow also recently gave birth to identical twin girls. On May 10th, 2020, Sarah posted a photo of her mom holding her two new grandkids and captioned it, saying that it was Willow’s first Mother’s Day.

Sarah attended Wasilla High School. She loved sports growing up, and she was on her school’s basketball team.

After high school, she attended several universities such as the University of Hawaii, Hawaii Pacific University, Matanuska-Susitna College, and finally, the University of Idaho. She graduated in May 1987 with a communications and journalism degree.

After college, Palin joined KTVA-TV and KTUU-TV as a sportscaster. After that, she joined Mat-Su Valley Frontiersman, covering sports as well.

What is Sarah Palin Doing now?

Sarah Palin is still active politically despite resigning as the governor of Alaska. She actively campaigns and sponsors Republican politicians. Palin is known for having supported Donald Trump in his 2016 presidential election bid. She also commented on politics from 2010 to 2015 on FOX News.

On March 11th, 2020, Sarah made an appearance on the show, The Masked Singer. She blew the audience away with her rendition of the hip hop song Baby Got Back. Hilariously, she didn’t hesitate to shout the adult-rated lyrics, “I like big butts, and I cannot lie.”

Sarah Palin was born in Sandpoint, Idaho, in the United States. She was born on February 11th, 1964. Sarah is an Aquarius Zodiac. Aquarius people are known for their charm, which Sarah is bustling with. Consequently, Palin was 56 years of age in 2020 when we compiled our article.

Sarah was born to Sarah Heath and Charles R. Heath. Her dad was a science teacher and a sports coach, while her mom was a school secretary. Palin’s parents moved their family to Alaska and settled in Wasilla.

Sarah grew up alongside her three siblings named Molly, Chuch, and Heather. Palin is the third born among four kids.

Sarah Palin is 5 ft 4 inches or 164 cm in height. Surprisingly her height didn’t stop her from becoming Wasilla High School’s basketball co-captain. She also played as a pint guard. Patlin weighs a healthy 55Kgs or 121 lbs.

Palin is, without a doubt, the woman to beat. Through her determination and passion, Sarah carved out a successful career in politics. Moreover, she has had a successful television career as well featuring in many shows ranging from sports, political news to reality shows.

Due to her many achievements, Time Magazine named Sarah one of the 100 Most Influential People in the world. In 2008, ABC aired a special where they named Palin as one of America’s 10 Most Fascinating People.

By now, you should already know that Sarah Palin is not your average 58-year-old. Palin is an avid social media user. She uses Instagram to post personal pictures of herself, her family, and her friends. On Instagram, her handle is @sarahpalin97. Her account boasts 205K followers.

Of course, being a politician, Sarah is tempted to post about politics once in a while. She especially can’t get over posting her grandkids. Whether it’s on their birthdays or just random family days, Palin doesn’t hesitate to post them. We can also see that she loves animals. She posted a photo on Instagram with her pup on February 25th, 2019.

On Twitter, her handle is @SarahPalinNewss. She has 1.3 million followers. Sarah does know how to use her 140 characters on the site. Often she posts about politics on the site.

Palin’s most prominent social media platform is Facebook. Sarah primarily uses Facebook as a political platform. She has a whopping 4.6M followers on the page.