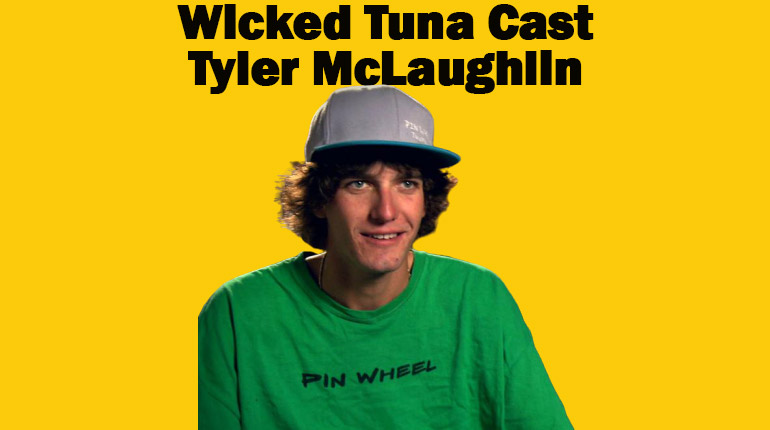 Tyler McLaughlin is a 32 years old American commercial fisherman and TV star. He is famous for his cast on the ‘Wicked Tuna,’ a TV show on National Geographic that focuses on commercial fishers in North Carolina as they compete to catch the most Atlantic bluefish tuna fish.

Tyler from Wicked Tuna is the owner and the captain of the boat he uses for fishing. This article will focus on his career journey and learn facts about him, like his net worth and marital status.

Tyler McLaughlin started his Fishing Career at an early age.

Tyler started fishing at an early age of two when he accompanied his father to the ocean. Both of his parents were passionate about fishing. He caught his first tuna when he was three.

Tyler is the owner and the chief captain of his ship. His vessel’s name is Pin Wheel, and it’s a 55 feet single engine boat. Every summer, he would go fishing in Rye Harbor; this became a tradition.

He does fishing as a sport and also to make a living. Tyler McLaughlin appeared on the show when it first premiered in 2012 and is competing with other crews to the last season.

He is not leaving the show. He may be the youngest of all the captains on the show, but he is the head of fishing in his team of two friends, Adam Mocer and Alex Whitney, and his younger sister Marissa. His team has done great exploits on challenging waters and still has a lot to give.

He does brand promotions and has properties like the boat he captains. He also runs an online shop called Pin Wheel Geat that sells clothes and accessories. To sum it up, Tyler Mclaughlin’s net worth is primarily attributed to his career in Wicked Tuna.

He engaged to a Long-time girlfriend, now fiancé Savanna Tapley.

Tyler from Wicked Tuna is engaged to his long-term girlfriend, now fiancé, Savanna Tapley. The two started dating in 2015. Savanna has been a regular visitor at the boat and seems to share the same passion with his boyfriend. As shown by photos on their social media accounts, she also gets along with Marissa.

There is no information about Tyler McLaughlin’s girlfriend Tapley on the internet. She is only famous for being Tyler’s fiancé. Other than that, she is the accountant executive for Tapley Insurance Agency, a family business. As events keep on unfolding, much information about her will come out. Be sure to get them right here.

Marissa is Tyler’s younger sister. She had a career before joining the show. After the demise of Nicholas Duff, she joined her brother’s fishing boat, his brother’s best friend. She is a co-captain with his brother. She can single handily handle the whole fishing process since she has the same skills as his brother, who has complete trust in her.

Tyler McLaughlin was born on 22nd December 1987 in Hollis, New Hampshire, U.S.A. Tyler is currently 34 years old, and his zodiac sign is Capricorn. He is the firstborn in a family of two siblings. His younger sister is called Marissa. His father is Marty McLaughlin, the president of McLaughlin Transportation Company. He found the company in 1973. There is no information about his mother on the internet.

Tyler played tennis while in college. It’s one game he still plays when he is out of the boat during his free time.

In 2015, Red Cross named him a hero after he helped in rescuing a sinking vessel in August 2014. He was also found on the other side of the law after being charged with assault. He paid $10,000 to clear his name.